Who Invented the Postcard?

By postcardmagnets the USPS Postcard Blog

Well, its not easy to know precisely, but many historians ascribe the earliest picture postcard to a Brit — Theodore Hook  — who mailed the card to himself in 1840.

Hook, a prolific writer in his day (1788- 1841) was considered to be a man of letters, although his most enduring legacy may have been the invention of the postcard.

It’s a humorous irony that might not have been lost on Hook himself, who was also known for his tomfoolery and pranks (more about this below). 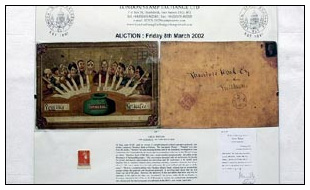 The first picture postcard, invented by Theodore Hook in 1840. (BBC)

The postcard he created, likely as a joke, included a caricature of post office workers around a gigantic ink well.  The reverse side included Hook’s address at Fulham in London, and a Penny Black stamp in the upper right corner.

Among Hook’s other achievements was the Berners Street Hoax, based on his bet that he could turn any house in London into the most talked-about address within a week’s time.

Hook busied himself by sending thousands of letters (not postcards) and invitations in the name of Mrs. Tottenham who resided at 54 Berners Street.

On November 27, Berners Street became packed with chimney sweeps, delivery carts, cake makers, doctors, lawyers and priests.  Several pianos and organs were delivered.  And many dignitaries arrived, including the Duke of York, the Governor of the Bank of England, the Lord Mayor of the City of London, and the Archbishop of Canterbury.  By day’s end, hundreds had made their way to 54 Berners Street, much of London became frozen in gridlock and Hook won his bet.

Alas, the postcard received its start from such notoriously enveloped beginnings.

But since we’re in the postcard business ourselves, we like to think of Mr. Hook’s invention as an example of man’s can-do, creative spirit.   Even today, the postcard fulfills its purpose: when you have something big to say, but don’t want to spend a lot to say it.

We make thousands of postcards everyday.  They’re made with magnets attached, and sent to a mailing list that our customers provide.  Please feel free to visit our postcard magnets website at magnetbyMail.com .