By postcardmagnets the USPS Postcard Blog

There have been plenty of ideas bandied about on how to solve the financial problems at the US Postal Service. 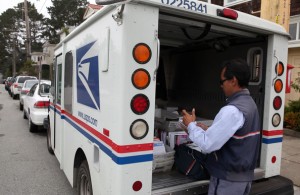 Recently, a Bloomberg article from ex-OMB director Peter Orszag (now a vice chairman at Citigroup), suggests that the USPS should go private.

His strongest argument is, by privatizing the Post Office, we remove Congress from the equation. He notes that Congress is unable to manage the USPS since it doesn’t allow USPS managers to make the cuts and raise revenue needed to fix problems.

His argument is compelling, but it’s not necessarily the best answer.

First of all, the Post Office is a service required by the US Constitution. Try making the USPS private, and you’ll need to deal with Article 1, Section 8.

Second, the privatization idea has been used before. It’s been offered as a panacea for everything from schools, to prisons, to highways. But the results are mixed; privatization doesn’t guarantee a better result.

The privatization idea is a red-herring. It’s simply taking us out of one pot of hot water, and putting us into another.

We’ve written about USPS problems in previous posts. An enormous issue, which Orszag did not discuss, is the multi-billion dollar ‘pre-funding’ imposed on the USPS by Congress. Developing a more equitable way for the USPS to save for future expenses would solve most of its financial problems.

The true problem isn’t with the Postal Service. It’s the way we’ve set up Washington.

We’ve set up a system that runs on 100% politics and 0% policy. We allow our federal budgets to be run like shell games — spending future money, papering over current shortages. We have a system designed to protect itself, rather than provide any responsible governance.

About postcardmagnets the USPS Postcard Blog

We print and mail Postcard Magnets. That's a large, laminated postcard and a magnet attached. They're used in mailing campaigns to promote a message or website. They're useful for businesses, non-profits, government groups, alumni associations and for political advertising. Our website is at magnetbyMail.com (please be sure to visit...) [Sorry, we're not an official USPS website -- better to check with them on any updated rates and rules...] END_OF_DOCUMENT_TOKEN_TO_BE_REPLACED
This entry was posted on Wednesday, July 25th, 2012 at 9:28 am and tagged with postal service, U.S. Postal Service, USPS, usps and politics, usps bankrupt and posted in Uncategorized, usps financial problems. You can follow any responses to this entry through the RSS 2.0 feed.
« The Downside to EDDM
New Postage Rates for USPS in 2014 »